You know, the very first book I wrote was called ‘The Old Woman and her Dog’. That was forty-one years ago. I’m not sure if writing that story shaped my life or was a premonition of things to come.

In brief, she was an old woman who didn’t like anyone and was fairly cranky. She saw a puppy in a window, bought the puppy and fell in love. This puppy grew into a dog and the two were devoted to each other. The old woman became sick and the dog saddened by this. The little neighbor girl came over to help and all three became the best of friends, then the woman died and the dog wandered off. The End.

So strange how in my adult life, and career working with people and their dogs, this scenario, more or less, is very real.

When seniors have dogs its super important for the entire family to be involved in the care and well-being of the dog. Many times, the dog will out live their owner, and that is when things can go very wrong if they weren’t right to begin with.

The wish is for seniors and their dogs to live a long, healthy, and prosperous life together. But preparedness is important. 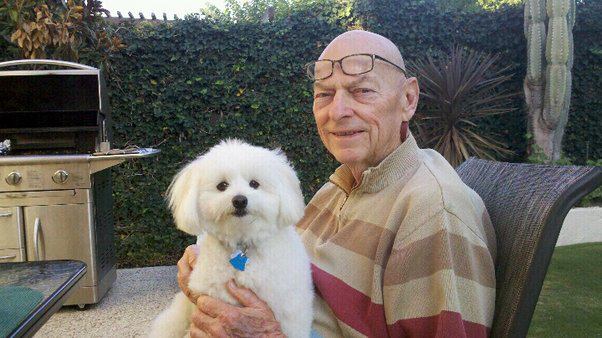 Socializing, training, potty training, and appropriate exercise are still at the top of the list for dogs living with seniors. If a senior needs to move into an assisted living and/or nursing home, it can be very stressful for the dog if they did not receive good socialization and training to begin with. Family and even extended family need to be part of the bigger picture to ensure that all is going well.

A responsible and caring family member should be appointed as the co-guardian of the dog. Assisting with socialization, training classes, food/feeding, veterinary visits, when needed. They should also agree to step in and care for the dog full time should that need ever arise.

Here is my cautionary story. I keep this memory front and center in my mind when working with families, their senior parents, and a very loved dog. I have worked with countless families over the years that have to face these tough choices. I no longer accept clients who are unwilling to step in and help their senior relatives, that has become my first question.

I received a call from an older gentleman, he needed help exercising his dog. His wife had a stroke and was now in assisted living, and he had Parkinson’s but was still living at home. We made an appointment.  He instructed me to not touch his dog because he would bite, and bite hard. He drew blood weekly on his friends and no person wanted to come and help him any longer. Also, when out walking keep him away from other dogs, he has never met a dog and wasn’t sure what would happen.

When we started chatting I found out that his dog was four years old, had never been out of the home or yard area, never been to a training class, and never socialized to anyone except the owner and his wife.

This little dog and I became friendly, went for walks/runs a few times a week, I was able to handle him over time, brush him and hand feed him. We worked on tricks they could do together. We were moving forward an ounce at a time, and there were lots of smiles.

Two months later this very kind gentleman had to move into assisted living as well. This little dog was going to be moving with him, so I set up a pet walker and my husband agreed to run with this dog three days a week.

He was so ill equipped to deal with life outside of his home that it went to hell in a hand basket very quickly. He wouldn’t let nurses into the room, would bite anyone that went near the wife, would bark out the window, and started to have accidents in the room (they were on the third floor).

They were told they had to get rid of him. The wife looked at me and said, ” it wasn’t supposed to play out this way. We weren’t supposed to be here just yet. We got him to grow old with us, spend time in our garden, and snuggle at night. We love him and don’t want to see him go. He is our dream”.

Their children were contacted and both said NO. They were financially able to not only take this little very loved dog of their parents, but to hire a trainer, dog walker and pet sitter full time to help out. Still the answer was no. They even refused to help with finding a suitable home for him, pay for transport, or temporary care.

I found a national breed specific rescue that was reputable, and we talked for almost a week. They found one of their foster families that would be happy to take him, and keep him since he had a bite history. I was very specific about care and his history. There would be no more surprises.

After tears and heart ache when we went to pick this little guy up, the wife had a seizure from the trauma of her dog going away and never being able to see him again. This older gentleman said, “I trust you and I am sorry I had to put this on you”. That was the last time we talked.

My husband and this little dog drove ten hours, stopped for hiking and runs along the way, and arrived at the foster families home. He went over his care, needs and special considerations with the new experienced foster family. They reassured him that they understood and had worked with dogs like this before and would give him a good life. My husband told them he would drive up and get him if it wasn’t the right fit.

I called three days later to check up and see how he was doing. They had euthanized him because he was too much for them.

I cried for a week straight and could barely stand on my own two feet. My husband was in such disbelief at the tragic end to this little dogs life and was inconsolable for days.

Every dog that I have had the pleasure to work with and who has allowed me into their space, and their life, means something to me. Some crawl into my heart a bit deeper than others, but it’s a connection that is undeniable.

Be prepared to help, love and care take when the time comes…