Fran was now turning into Franny, Frannie Girl, Franny Bear, and about a dozen other names. She was settling in with us and us with her. While there was comfort on some level, there was still the side of her that caused some stress. As she started to age and come into adulthood, her confidence in who she was grew too. Not that this was good or bad, but more a reality check for me, for life. 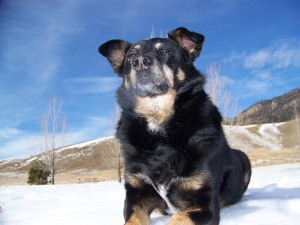 The interest other dogs had in her when she was younger never subsided as she aged. Male dogs turned to jelly at the sight of her, females became more aggressive with her. But now she was willing and able to give it back. In all of the years she has been with us, even with the bites and acts of aggression directed at her during those first months, and some subsequent altercations, she has not once scraped, punctured, bit, or torn the flesh of another dog. She has literally scared the shit out of several dogs, going pilo erect and covering them with her body and basically screaming into their face, but never even a wet spot from an open mouth. Her restraint is impressive, even with dogs that had behaved inappropriately with her. This has always made me stand in awe.

When she reached adulthood, no dog misinterpreted her intentions, not one. With one glance she could send a dog away, with a step forward and lowered head she could make them run faster. When she wanted to play and interact, or even get a bit flirty with the boys, they all said yes, and I’m pretty sure she made their day in the biggest kind of way. If she lay down, not a single dog would disturb her. And she was just being Franny, she never had to prove anything to any other dog. She was a dog with some pretty heavy mojo!

She raised every puppy we brought into the house with grace. She would pick them up in her mouth and carry them around for the first few days, try to nurse them and hide them. She would show them the ropes around the house, and they all followed willingly. All of our household dogs have always had a great deal of respect for her. She even became Story’s muse for a few years. Again boy dog, he just couldn’t help himself. He was so into Franny, love struck on so many levels, and she couldn’t have acted more disinterested. Every once in awhile she would throw him a bone of sorts and play with him. Those were his happiest days as a puppy. 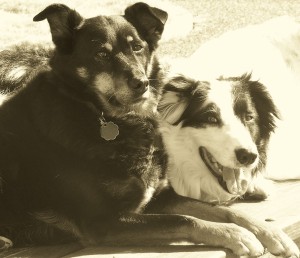 We had a list as long as St. Nicks with behaviors we were teaching and/or modifying. At the heart of everything was a great deal of patience and management of space. While the norm at the time was to get your dog out and socialize them to everything, Franny did best at home or in the mountains. Agility trials, events, and down town environments gave her a great deal of stress, she found solace at home. That doesn’t imply that things always went well at home, but she operated with more freedom of the mind and spirit, she took deep breaths, and we could reach her. She saw us when she wasn’t stressed, and this was the key to reaching her and moving forward together.

During this time I was a volunteer instructor for our local agility club, studying and preparing to become a certified trainer, and started my own training business, Paws & People. I was invested in the dog world and it felt so right, more right than many other cool choices I had made in my life.

I was also competing in agility, herding and freestyle with my Border Collies. Ribbons, titles, certificates of achievement, appearances on National TV, and articles where adding up. People knew me through my Border Collies. But Franny is the single reason why my other dogs had been so successful. Franny made me the trainer I was to become. She required me to learn more, do more, and most importantly, have the stamina and persistence it takes to own a dog outside of neutral.