Why I write what I write –

Since 2003, after every puppy class, I would send my clients a written follow up of what we did, and what their work should be like in the coming week. A friendly reminder, but also a bigger view of what was happening, what they could expect, and their responsibilities.

A few clients encouraged me to start my own blog as they enjoyed my weekly letters, and thought it would be good for my conversations to be more widely read. I wasn’t sure that that is what I was looking for, I enjoy knowing who I am writing too, and knowing if there are questions or concerns, someone can feel safe and comfortable enough to contact me. So I thought about it, sat on it, read a bunch of blogs to see if this would be worth while, and then I tip toed in ever so quietly and started my conversation in the bigger world.

My blog has been one of my most cherished ‘rooms’ in my daily routine. I write as if you are right here in the room with me, and I am explaining something, asking something, listening to something, and it is an exchange of sorts. Whether the exchange is about new knowledge, or shared emotions, or understanding, I write with connection.

I have loved this journey.

This little blog of mine has a super nice size following from all over the world, and I have met people I couldn’t have any other way. I have had some of my blogs reprinted in Magazines and Dog Club journals from the US to the Czech Republic, to Poland, and beyond. I have had several posts go super viral, and that is a mixed bag for me. While my words are seen by many, as in 30,000 reads a day, and I get to meet new people, it’s big, super big, and leaves me feeling wide open. Something I need to get use to a bit more. Again, I tip toed into this arena.

I have never accepted advertising on this blog for additional income, as again, this is my conversation with you, and it is honest. Since 2010 I have received 19 nominations and 4 Maxwell Medallion Awards from the Dog Writers Association of America, and offers to write for other blogs as a guest blogger. I tried being a paid writer for a short little while with Murdochs Home & Ranch. They were super nice to me, and we had an arrangement where I could write whatever I wanted to, they could not edit it or change any wording (typos and all, because that is just me), and they were allowed to use it to promote their items. And I found out, writing is not a monetary thing for me, it is a conversation thing for me. Maybe one day I will write a book, maybe one day I will publish an article that gets picked up, but I am not a stable writer, it comes from a different place in me, again, maybe the most honest place in me.

And since I started my blog, and have become really into reading other bloggers blogs, I stopped following main stream media, print and TV. I have learned way more about life in so many areas, from politics, to health, to food, to animals, to everything, without the propaganda spin, or the advertisers determining what can be said and what can not. Reading words that are written freely without an agenda means everything to me, and you start to see your life and the world in a different way.

The Underbelly of Blogging you should all be aware of –

Every single industry has an underbelly, but we usually aren’t aware of it unless we are in that industry or have experienced it in some way. WELL, I need to cool my jets a bit because there are now insidious company’s, and that is the kindest word I could bring myself to use, like MeganMedia.

Follow this, you can hire them to promote your campaign, sounds good, sounds straight forward. MeganMedia then in turn, hires, as in pays, bloggers that they call INFLUENCERS, to write and promote whatever campaign they are being paid for. Doesn’t mean they agree, have ever done it, know anything about it, they are simply being paid to influence people for whatever campaign is going on. And apparently, they have 100,000’s bloggers on their roster.

As you all know, I follow the vaccine controversy in both humans and animals, pretty closely. The corruption and subsequent profits in this industry are mind boggling, and the astroturfing and media manipulation is more than prevalent, it is systemic. As I have posted before, this isn’t about pro or anti, it is about all of the parents that have a lot of questions that are not being answered. Too many people are being dismissed, fraud and corruption are becoming more and more transparent, but anyone that speaks out or is doing independent research is either shunned, is stripped of their career, their lifes work, or are found dead. Dr. Judy Mikovits is a great example. Her video is about an hour, but totally worth it!

Yesterday I learned that MeganMedia, Vaccines, and our own US Government all had something in common. Our very own US Government hired MeganMedia to promote mandatory vaccination and the pro vaccine voice. Please sit on that for a moment. Or sit on it for as long as you need to. This is our government, hiring a company to hire independent bloggers, to spread propaganda to further their agenda, WITHOUT conversation, through what is seemingly an independent bloggers view point. Your tax dollars by the way. Here is a screen shot for your own edification. This campaign will run from April 11th thru May 11th. If you see anything posted any place in regards to this topic, it is simply paid for propaganda. 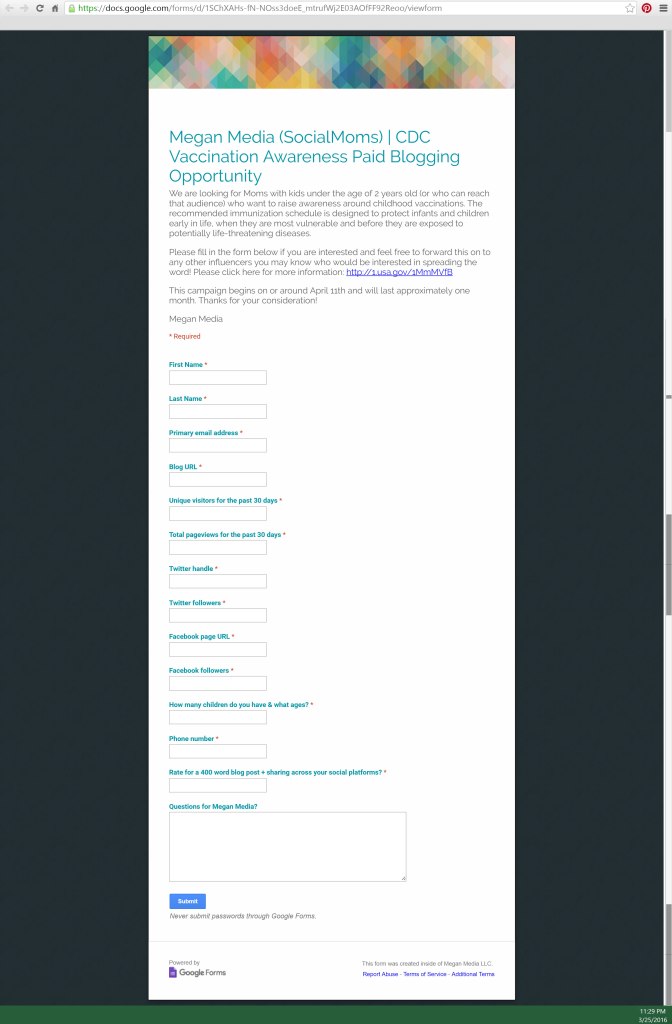 Sometimes my posts help you, sometimes they make you angry, some of my words might wake you up a bit. But the bottom line, they are honest, no other agenda besides writing them down. I abhor paid posters as they are as fraudulent as main stream media and the slant they have to put on stories to appease their advertisers. Paid posters tell you what they want you to believe because they are being paid. Ethical compass broken.

Soap Box and all, Nancy