I saw Tassie today and her owner had read my post yesterday about FLEX. She wanted me to tell Tassie’ story too.

Tassie and her people are from Alaska and winter over in Montana. I know I know I know, I would go further south too, but they love it here and are avid skiers so it all works out. I met Tassie when she was two, that was almost five years ago. They were just starting their agility career, super excited and enthused by the sport. We met about once a week for private training during their winter stay in Montana. Occasionally they would take group classes to learn other skills, but agility was the focus.

Tassie was a fun, scampy, and an athletic Golden Retriever. Super social with other dogs, to the point of forgiving, and really sweet to every person she met. She was a non controversial dog, pretty much what every family pet owner is looking for.

One of the benefits of being a trainer that has a background in dog sports, search and rescue, and relationship building skills, is you become super sensitive to nuances and subtitles with each dog you work with. I’m going to clarify that a bit further. It becomes normal, almost intuitive to observe changes in how a dog moves, gaiting, expanding and contracting. Feeling how a dog uses their space, either physically through movement, or socially with other dogs and people. A dogs emotional range, or lack there of is generally a signal of what is possible on that day. And of course willingness, either a dog is or they are not. All of these aspects open up questions for a well seasoned trainer. When there is a little, hmmm, even if only in my own mind, I observe a bit more closely, independent of what the Handler is trying to tell me. 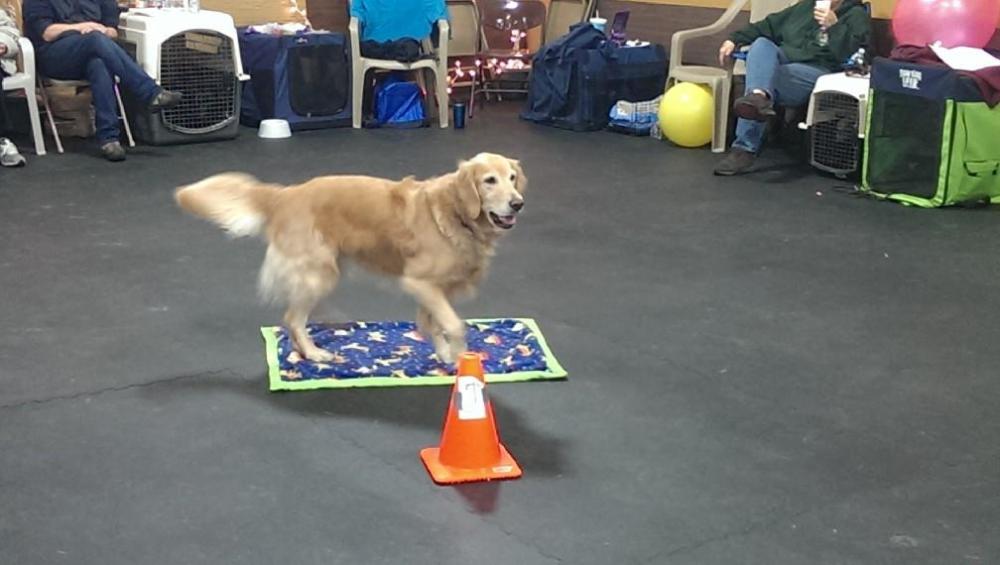 About three years ago, Tassie and her Handler came in for a group class. When they entered our training space Tassie did a low growl to the first dog she passed, and it was matched by a low growl back. Hmmm, I need to watch a bit more closely, something is happening here. The class went on, and anytime a dog passed Tassie they would growl low, almost not audible. Hmmm. So I asked her Handler is anything new had happened that week, new outing, guests over, dog-dog interaction, anything stand out? Nothing remarkable so I let it go.

The following week they came in for another group class and the same thing, low grumbling from Tassie, met with low growling and grumbles from the other dogs. Hmmm, something has definitely changed socially. As she moved around the room I noticed that she was tight, and not extending and using her full range of motion while working. Hmmm, something has definitely changed physically.

I asked her Handler more questions and nothing was adding up, so I asked her to go to her veterinary and ask for a full metabolic blood panel with thyroid, including T3 & T4. Why? She’s fine, she’s happy, she’s beautiful, she’s eating well, sleeping well, and I have my first agility competition of the season in two months. You’re crazy.

So, just for shits and giggles, please go in and get this done, all is not well, and you need diagnostic work done.

But on the way home she decided to stop by her veterinary and ask, to prove me wrong. I am always totally okay with this, because sometimes I am, and if that all it takes, well again, I am okay with that.

Her veterinarian called me crazy and said no to the blood work. I get that a lot.

I asked Tassie’ Handler to get a second opinion, but she decided to go back to her veterinary and insist on blood work. She wanted to get me off of her back if nothing else. Her veterinary called me crazy again, but drew the blood reluctantly. Tassie had a great coat, wasn’t really over weight, a pound or two (aren’t we all), was happy, ate well, competed in agility. This was a young four year old healthy female Golden! Humpf!

When the results came back the veterinary was shocked and apologized profusely. Tassie wasn’t a little sick she was a lot sick. 100% of her thyroid was being attacked by her own immune system, her numbers were crazy, and an endocrinologist who was also in Tassie’ class was even shocked by the numbers she saw. She went on medication that day for the rest of her life, and within a month the changes started to present in a more positive way.

No low grumbles, more social, more energy, a silky different coat even changed in color a bit, and more biddable.

I worked with Tassie this morning, her Handler, and their new puppy Finn. She makes me smile and I feel lucky to have them with me all winter. She is still scampy, still silly, and such a lovely soul. And when I visit her at her home, we just mostly snuggle. ~ Nancy